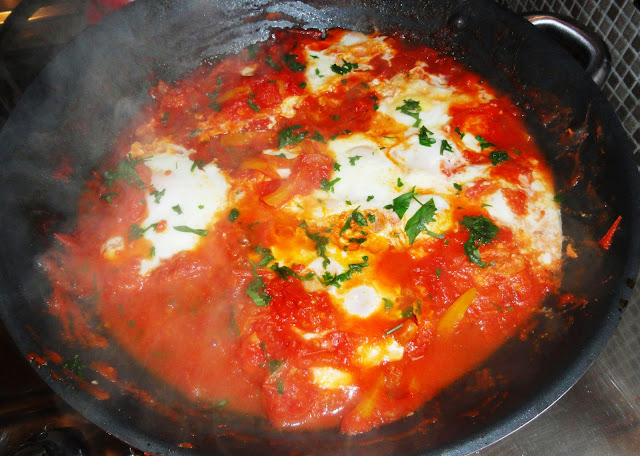 The name is wonderfully poetic: shakshuka. Shahk-SHOO-kuh. It means "a mixture," and it's a dish of north African origin -- one that's been fully embraced by Israeli culture, enough so to become something like a national breakfast dish. Shakshuka is to Israelis what bacon-and-eggs is to Americans. Its name may have Berber roots (chakchouka is a vegetable ragout), though shakshek means to shake in Hebrew, Berber, and Tunisian Arabic -- so the word's origin may in fact be ancient (and extinct) punic in origin. That's a dish with some history behind it! Its popularity in Israel, however, can be traced to the Tunisian and Maghrebi Jews who emigrated to Israel by the hundreds of thousands in the 1950s. Versions of, and variations on, the dish exist all over the Mediterranean and Middle Eastern worlds, from Spain to Turkey, Yemen to Libya to Egypt...even over to Mexico. 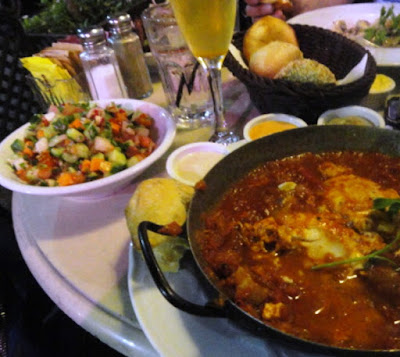 The common thread is eggs cooked in a vegetable sauce, often tomato-based and spicy, but not exclusively. Here, I will focus on a few iterations that are Israeli, that I've either eaten in Israel or made myself, inspired by Israeli versions of this savory dish. The photo at right was taken at Benedict, a chain of restaurants in Tel Aviv open 24 hours a day and serving breakfast food. There's nothing better than a night out of drinking in the bars and along the beach in Tel Aviv, followed by shakshuka and Israeli salad with pita bread and various dips and sauces, all downed with a glass of champagne at 4 am! But this breakfast-all-day dish is also great as a light lunch with a green salad, or as a dinner: it's vegetarian, kosher, and gluten-free (as long as you don't sop up the remaining saucy goodness with some bread, which would kind of be a shame to miss out on...but if you're going low-carb or gluten-free, this dish sans bread product is ideal). I recently made the dish for my boyfriend's family visiting from Texas -- heavy on the peppers, as I had an abundance of them -- and they loved the dish. I've been wanting to share this favorite of mine, so this past weekend's brunch was a reminder and inspiration for the recipe below.

Now, the dish itself has so many variations that it's impossible to claim that one way of cooking it is the absolute 'original'. It's a dish that's meant to be switched up, modified, pared-down or gussied-up according to personal taste, seasonality of ingredients, and the whims of the cook preparing it.

Dr. Shakshuka is a classic spot just inside the walls of the old city of Jaffa, at the south end of Tel Aviv along the Mediterranean. The Libyan owners prepare their Tripolian version of shakshuka, with plenty of variations, and the atmosphere is rustic and charming. This is a great spot to try the dish for the first time. But for armchair travelers and those who may never make it to the "Holy Land," here are the basics: the classic version has a tomato base. When tomatoes are in season, summer and into early fall, use fresh tomatoes. In cooler months, use the best quality canned tomatoes you can find. It's the same thing I tell all of my cooking students about making a great tomato sauce for pasta.

And, as for consistency and flavor, I've found that the best results actually come from a mix of in-season, ripe and juicy fresh tomatoes with a touch of canned, top-quality San Marzano tomatoes, mixed together. If you use great tomatoes, there's no need for the addition of tomato paste. I also add peppers (usually red peppers, or a mix of red and yellow), as well as onions and a bit of garlic. Plenty of chili pepper, anything from fresh jalapenos to dried Calabrian Italian chilis, but you can experiement to taste. I also usually add a bit of za'atar, a spice blend from the region consisting of dried herbs like thyme and oregano, plus sesame seeds and sumac powder. Cumin and coriander are also nice touches. I always finish with some fresh parsley, and sometimes fresh cilantro too, though scallions and/or chives are a nice finishing touch as well. 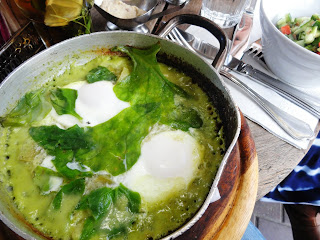 It must also be noted that a major variant on the dish is green shakshuka. I know, I know -- you were just getting a grip on the original version! But trust me, you'll want to experiment with the green version too. The base here can be anything green but it's particularly good with a green tomato base, or a tangy tomatillo base (tomatillos are not green tomatoes! They are actually part of the corn family, husked as they are, but that's another discussion). 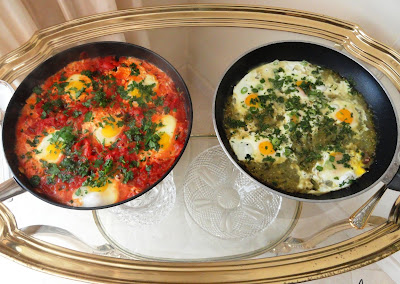 The tomatillos would be cooked down much like tomatoes, with onions and green peppers and garlic and chilis, and then once the eggs are nearly cooked, you add a little fresh spinach, as in the photo here (taken at another cute cafe in northern Tel Aviv). Maybe some arugula or other greens for a nice touch, and you're done. You can even add a glug of green tabasco if you want to carry through the theme. And if you really want to go all-out, as I did when I made an elaborate Israeli brunch for my extended family in Florida not long ago, you can pair the green and red shakshuka side-by-side for comparison. Each version has its devotees, but either way I think you'll find it's a great addition to any home cook's repertoire. L'Chaim! 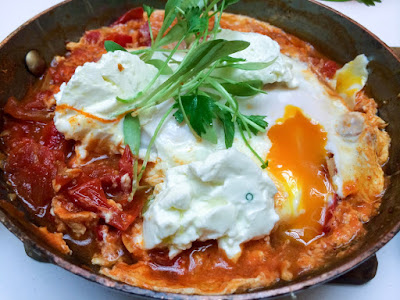 - Heat the oil in a large skillet. Add the onions and peppers and sauté over medium heat until softened, 5 to 8 minutes. Add the chili pepper and fresh tomatoes and cook to combine flavors, another 5 minutes. Stir in the garlic and sauté for another 2 minutes.

- Add the canned tomatoes (make it a full 28-oz. can if you're not using any fresh tomatoes).

- Stir in the salt and pepper, sugar, paprika, cumin, coriander, and za'atar, and cook for 15 minutes, covered, to soften all the ingredients to the saucy stage.

- Uncover and crack the eggs into the tomato mixture. Cover and simmer for about 10 minutes, or until the whites of the eggs are opaque and the yolks are cooked to your preferred consistency.

- Sprinkle with the fresh parsley/cilantro and serve hot.