RESTAURANT REVIEW: Chicago's Ēma and Girl and the Goat 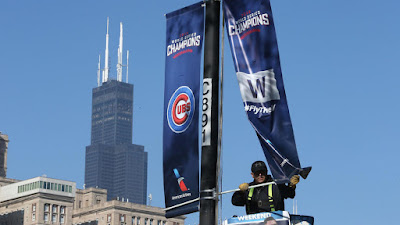 I'm looking back with nostalgia on just a few weeks ago, before the U.S. Presidential elections and the current "politapocalypse" -- to a time when everyone was rooting for the underdog...in sports. The first week in November was a big week for Chicagoans. The Cubs won the World Series after a 108-year drought for the world champions and fans alike, and the city was on edge in the lead-up to the win. For the celebratory Cubs' parade, record crowds were reported, and they even dyed the Chicago River bright blue in the team's honor. I'm not a baseball fan, but I love a good underdog tale, and the feeling in the city all week was pretty electric (fitting, as I was there doing work with General Electric). I was in the right place at the right time. 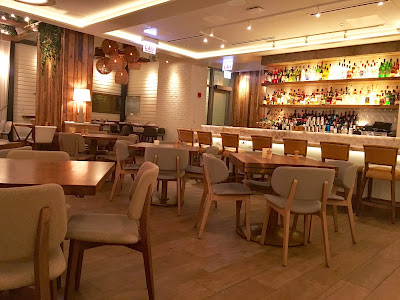 By happenstance, my flight from New York on Halloween evening arrived late, so I missed dinner in my hotel's restaurant and was directed to dine at a new place next door to my hotel, called EMA. I didn't realize until I got there that it's spelled Ēma with a long "e" -- as in the Hebrew word for mother. I asked my server about it and was told that the chef, who is Californian, had traveled around Europe and Israel for volleyball tournaments, and spent time in Israel. 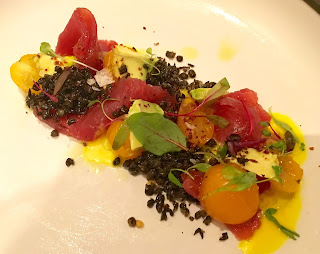 When I started reading the menu and the wine list, I was surprised and delighted to find some really interesting items, including a Greek cheese from a tiny island I'd just visited in September -- one which I'd never seen on a menu anywhere in the States. Color me impressed! There were also interesting wines from Israel, Sicily, and Greece that I really love but that you don't find too frequently on lists in the U.S., even in top Mediterranean restaurants in Manhattan. 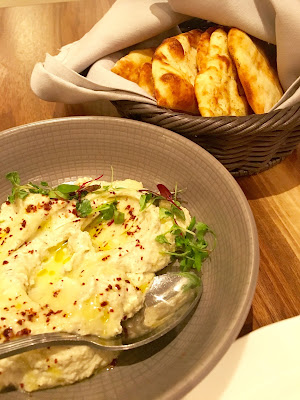 I started off with a glass of Calabrian sparkling rose' (Garruba "Incanto Rosa") and decided to go with my version of comfort food, my culinary happy place: eggplant. They featured a smoky grilled eggplant puree served with warm homemade pita bread, and I could have made a meal out of these two items alone. Or I could have bathed in the eggplant dip! It struck the perfect balance of flavors, with the sweet and smoky eggplant flesh whipped with garlic, plenty of lemon juice, a little yogurt and a generous dusting of sumac for tang and a tart finish. And the warm bread! Suffice it to say I daydream about snacking on this pretty much every day. The next dish I ordered was a tuna crudo with crispy lentils (perhaps my favorite way to enjoy lentils), heirloom tomatoes, avocados, and turmeric. Every restaurant of a certain level seems to have a raw tuna dish on its menu, and many are simply mediocre, which is a shame because it should be illegal to waste good quality fresh tuna on middling preparation. Here, the tuna is lush and rich, and it's got a nice assortment of accompanying textures and flavors so that each bite awakens the palate. 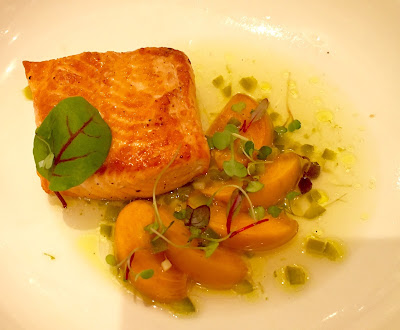 The menu is structured in a way that encourages grazing -- mezze and small plates and portions that allow for ordering multiple dishes -- and so I moved on to a salmon dish and a vegetable dish. The salmon was a beautifully seared 3-ounce piece served in a shallow pasta bowl in green tomato water, with pickled green tomatoes, Michigan peaches, and herbs. It was light, bright, and happened to be perfectly matches to the balmy weather outside -- upper 60s in Chicago on Halloween! 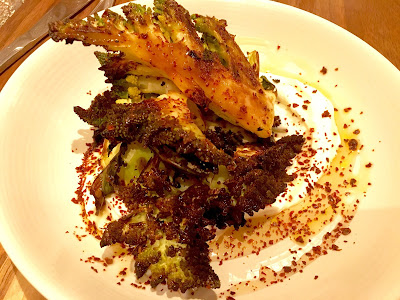 Now, what would be relegated to side dish status in most other dining establishments was elevated to a "hot mezze" here. It's subbed as "Pan-Roasted Romanesque Cauliflower", which isn't exactly right. It may paint a clearer picture for American audiences of the taste they'll be getting in the dish, but in Rome (hence the "Romanesque"), this is simply BROCCOLI. It is not called "romano" anything, nor is it called "romanesco" which is what so many other restaurant menus dub this veggie. "Romanesco" refers to anything that is Roman or Roman-style, and is not exclusive to cruciferous vegetables. Nomenclature aside, the dish was absolutely delicious. The broccolo romano was tender and seared crispy at its tips. It was served on a shmear of labneh/Greek yogurt, delicious olive oil, and plenty of that delicious tart powdered sumac, which for me is a personal favorite spice. It all came together as more than the sum of its parts, and a dish that is both filling and could double as a main course for a vegetarian. I accompanied my later courses with a hard-to-find Nerello Mascalese in WHITE (it's a red grape), from Terrazze dell'Etna grown in the rich volcanic soil of Sicily's Mt. Etna, a volcano I've visited while it was erupting. Very cool, and a very unusual wine. 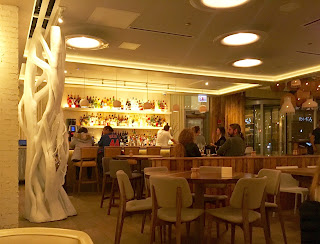 My only disappointment was in later finding out that the chef is actually CJ Jacobson, from an early season of Top Chef (when I still watched the show religiously) -- he was always a favorite of mine, both for his cooking chops and his funny, warm personality and capacity to call things as they were. I had chatted with my server there and she'd mentioned that the chef would be happy to meet a fellow chef who'd lived in Italy as I did, and who'd traveled around the Mediterranean as much as I had. I mentioned I was staying next door for work for a few days, and she told me to "swing by some time and have a chat with the Chef"! But I got bogged down with work and I never made the time to stop by again. My mistake. 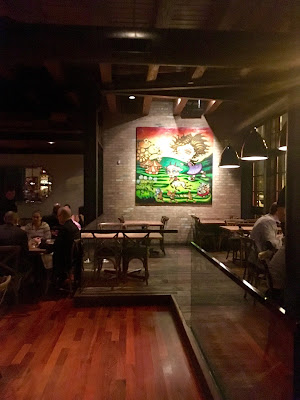 Speaking of Top Chefs, Season 4 winner (and the first female to snag the top spot) Stephanie Izard has been running a fantastic restaurant since 2010 in the West Loop section of Chicago. The Girl and the Goat, as it's called, offers a truly eclectic menu set up with a grazing-style format (see a trend here?). She hops from southern Europe to Southeast Asia and all over the world map for influences, to (mostly) excellent effect. You can start with items as simple as warm marinated olives, or an umami bomb like pan fried shishito peppers with parmesan, sesame, and miso. 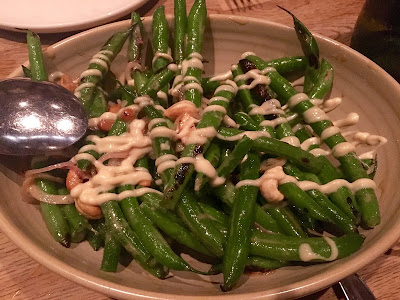 My culinary school friend and I went for the green beans, with the encouragement of our server, because it seemed an interesting, slightly Thai treatment of a green veggie we both enjoy. What we got was basically "green bean crack". This dish was addictive! It's described as being served with a fish sauce vinaigrette and cashews, but to say it tasted of so much more would be a huge understatement. I would have split 3 orders of that dish alone and happily called it a night. But, there was so much more to try. We moved on to the blue cheese sweet potato peirogies, in honor of the large Polish population in Chicago. 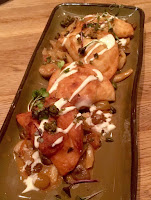 This turned out to be the only disappointment of the evening. The peirogies were somehow breaded and fried, so they ate more like a Jamaican beef patty than a Polish dumpling. They were served with a mushroom ragout, mushroom creama (sic?), and fried capers. Frankly, I'm not sure all of the flavors worked as well together as I might have imagined. Not so great. So, we were very happy to move on to our next dish: wood-fired shrimp with a pork and peanut ragout and a cucumber salad. 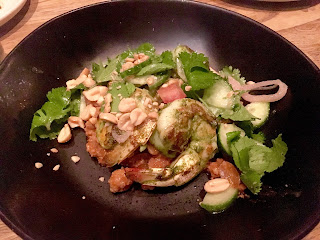 This was delicious -- and again, echoes of Southeast Asian preparations. I must admit, as a chef and a non-kosher Jew, I am a sucker for the double-traif pairings like a pork-peanut ragout with shrimp. I think the flavors work really well together (and it's somehow more delicious in being somewhat forbidden -- mostly-kosher Jews who go out for Chinese and order the occasional shrimp with lobster sauce know of what I speak). And lots of sour lime and fresh coriander help anything along, in my view. Next up, and to finish our shared world culinary journey, was the extremely rich escargot ravioli. 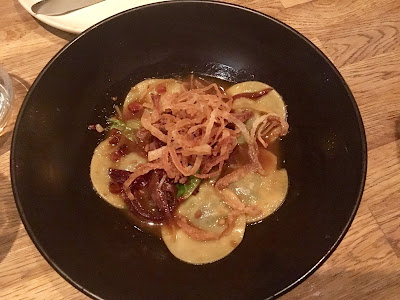 Yes, each raviolino was filled with a whole escargot, sauced with a tamarind-bacon number, and accented with escarole, celery, and crispy onions. It was over-the-top decadent, French-Italian with an Asian accent, as if some Torinese chef with a sense of humor and a stint in a Hanoi kitchen had dreamt up the dish. It was the perfect ending to tip us over the edge, so that desserts were no longer a possibility. If they HAD been in the picture, however, I might have ordered the "All the Leches" cake, or the caramel corn and malt balls, as the caramel popcorn and "chocolate magic shell" are almost too much to resist. I'd also go for some more daring dishes like anything from the goat menu, or the pastrami-spiced beef heart. But we stuck to slightly safer bets (and the escargot), and left very happy. The service was really friendly and the atmosphere was fun, and 6 years in, still electric. Or maybe it was just that a future Cubs win was in the air...