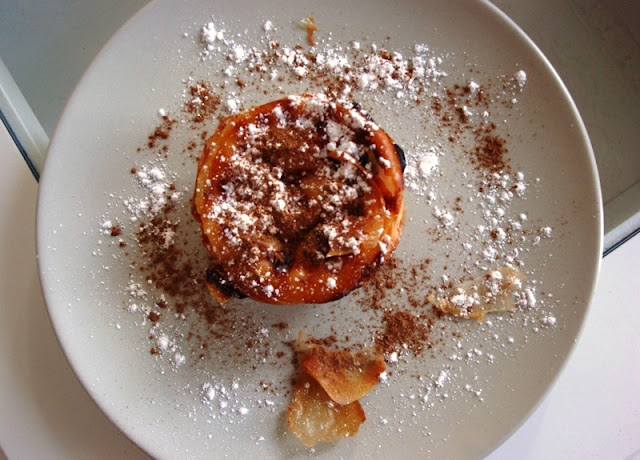 How good could it possibly be? I mean, it's a dessert that contains no chocolate. So went my thinking, after all I'd read and heard about the Portuguese cooked custard and filo-thin pastry-crusted tarts, pasteis de nata. 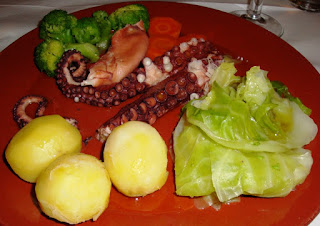 I'll admit, I was smitten with the food in Lisbon, at first bite. In my experience, the food in Portugal -- the basic, raw ingredients -- have more flavor than one would ever expect, a phenomenon with which I was quite familiar from all of my time spent eating up and down the Italian peninsula. Call it culinary terroir. I ate a simple boiled potato in a simple casual lunch spot, served alongside a piece of carrot, broccoli florets, cabbage, and a few octopus tendrils...and it was one of the most flavorful potatoes I've consumed, all earthy, spuddy goodness. Ditto its veggie and aquatic sidekicks. 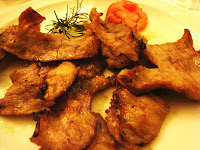 I dined on some salted and grilled sliced Iberian pata negra pig for dinner, and it was the single best piece of pork I've ever eaten (and I've even butchered my own locally raised hog in Italy). Even the plump, smoky grilled sardines we bought from street sellers during a patron saint festival were packed with briny flavor like nothing else. But somehow, the idea of these little pastries didn't thrill me. 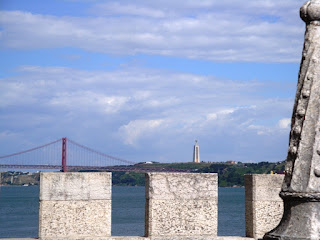 So one Saturday afternoon in June, my friends and I hopped onto Lisbon's canary-yellow streetcar to head out to Belém, the western Lisbon neighborhood that boasted many tourist sites and a gorgeous view of the Teja River, the other side of the city, and west to the Atlantic. We shared a delicious seafood lunch outdoors in the shade, walked along the water, visited Cathedrals and towers and the tomb of Vasco de Gama. 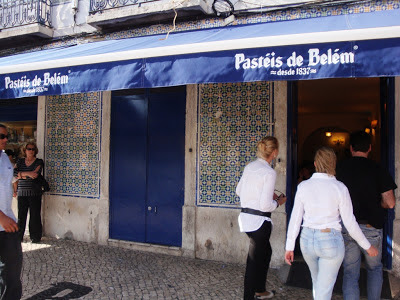 At the end of the afternnoon, we stopped in to the Antiga Confeitaria de Belém,founded in 1837. I'd been told by various sources that this was a must-try. And the thing to get, of course, was the pastel de nata, here called pasteis de belem, as they were supposedly invented in a monastery a few doors down from this pastry kitchen. So, we waited on the ever-present line. We pointed to the pastries and held up 4 fingers, and the mandarin-sized pastries were put on cardboard, wrapped in the signature blue-and-white paper, and placed in a bag with some packets and napkins. We got back on the tram and once I sat down with the bag on my lap, I realized the pastries were still warm from the oven. This started to entice me. 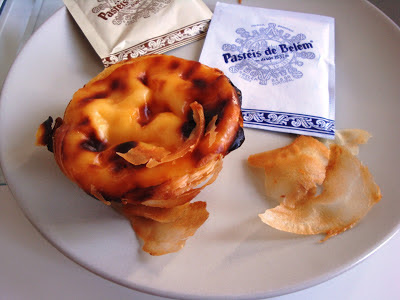 We returned to our apartment to relax, shower, and freshen up before cocktail hour, World Cup viewing, and dinner. We unwrapped the pastries, and I admired their eggy yellow custard fillings and golden, blistered tops. I realized the colorful packets they included in our bag were powdered sugar and cinnamon. We sprinkled their contents on top of the pastries and as I picked up the pastry, some of its crispy shell flaked off and fell to the plate. And then I had a bite....and another. A few more bites and the pastry was gone. I looked up at my friend who had just devoured her pastry as well. And then my friend Matt, who wasn't interested in trying them. Wow. They were ethereal, light, full of flavor and the crackling outer pastry shell was an amazing textural contrast to the sweet, creamy custard contained within. Matt simply said "It looks like I may be hopping on the trolley tomorrow morning to get these for breakfast, ay ladies?" At the very least! I replied: "I'm thinking of sending you back right now." What a treat.

Though nothing beats these pastries fresh out of the oven of Antiga Confeitaria de Belem, the recipe below has been adapted from NYC's Alfama restaurant, and approximates the pastry. You know, a placeholder while you plan your trip to Lisbon... 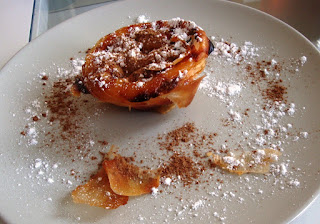 The secrets to a crispy, flaky pastry are to make sure the butter is evenly layered, all excess flour is removed, and the dough is rolled very thin and folded neatly. A thermometer will help you to accurately gauge the custard.
Note: Because home ovens can’t match the heat of those at the Antiga Confeitaria de Belém, where these treats were first made, your pasteis may not get the beautiful golden color like those in the photo. They'll still be delicious, though, and best eaten warm, same day as they're made.

Special Equipment: a mini-muffin tin with 2-by 5/8-inch wells

Make the dough:
Make the custard:
Assemble and bake the pastries:
Posted by Dana Klitzberg at Friday, May 31, 2013 No comments: Links to this post 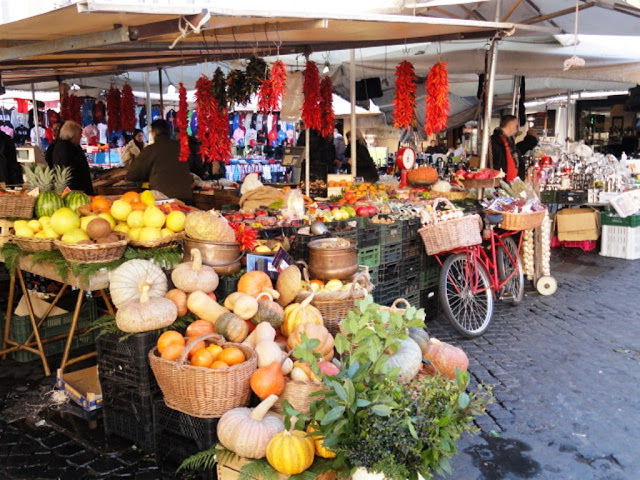 For the first of my posts focusing on great MARKETS around the world, I feel compelled to start with what feels most like my "home market": Campo de' Fiori in Rome. I know there are those who claim that the Campo is a market for tourists, and increasingly over the years, the market has indeed started to cater to travelers and tourists, selling phallic pastas and aprons emblazoned with "anatomical" images of Michelangelo's David statue. But it's also most definitely a market for locals, and provides produce for some of the top restaurants in the city as well. I should know. I was a local there for many years, and have been shopping the market in Campo de' Fiori since I first moved to the 'hood in 1999. My ex-boyfriend is one of the top toques in Rome, and he bought produce there for his restaurant. As one of the first chefs to teach cooking classes in the city, I took students there to buy ingredients for our menus. I saw elderly Italian nonne picking over produce, and I ran into chef friends ordering cases of specialty baby peppers or fresh porcini mushrooms for their ristoranti. There were tourists, sure. But as with any market in Italy, the mercato di Campo de' Fiori is a central meeting place where people of all varieties come to enjoy the aromas and the scenery, to catch up with friends and gossip, and of course to buy food: home cooks, professionals, and tourists alike. 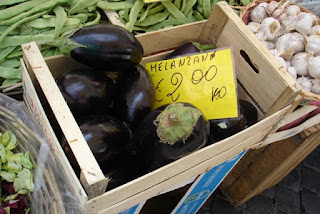 Campo de' Fiori, in Italian, means field of flowers, which this piazza once was. And it was here in 1600 that Giordano Bruno was burned at the stake for heresy, and where, six years later, Caravaggio (the first bad-boy Italian artist) killed a young man in a sword fight that ended in Caravaggio fleeing Rome for the rest of his life (sadly, only another 4 years). Today there's no statue for the murderous master of chiaroscuro, but there is one for Bruno, who overlooks the square from its center. These days, though, the only fights you'll see in the piazza are people haggling over the price of pomodori, or inebriated twenty-somethings fighting over young female tourists' attentions in the piazza's bars. 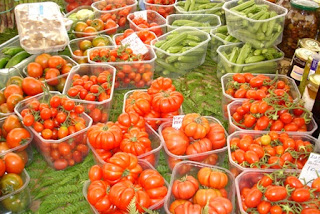 The market is a riot of color and noise, with the season's offerings on tempting display. As I always explained to my cooking students, Italy as a united country is a century younger than the U.S. Of course, as a place and a culture it's been around for thousands of years. But Italians tend to think of themselves even today as they always have, historically. They think locally. Regions and cities and towns have always had rivalries, teamed up to fight common enemies, killed each other's kings and overthrown each other's governments. And though all of these places, these regions, these kingdoms are technically united under the Italian flag and its government today (troubled as it is), these historic differences run deep. So instead of conjuring a coup, in modern times, these rivalries are translated to two places: the soccer pitches and kitchens -- for the most part, less dangerous than government overthrow. For the most part. 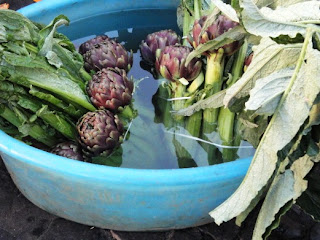 So, what does this all mean for food? Well, it's on display at the Campo market. Italians haven;t experienced the locavore movement like America has, because Italians never really strayed from eating and cooking locally in the first place. What you will see in the market are Roman artichokes, globe-shaped beauties instead of the tulip-shaped variety you'd find in Venice. (Venice! chu-puh!). The greens are local, bitter greens for which Rome is famous. The fiori di zucca are found at the end of the zucchine romanesche, which have vertical striations that make them different -- and better, of course! -- than zucchine from elsewhere in Italy. In fact, most everything you see here is grown within Lazio, Rome's region. The vendors prefer to sell strawberries from nearby Terracina. They want arugula ("rughetta" in Roman dialect) that grows wild along the road heading out of the city. They want to sell you pecorino Romano, not that other sheep's milk cheese from Sardegna or Tuscany. No. Here, you get what this wonderful city gives, and it gives a bounty. 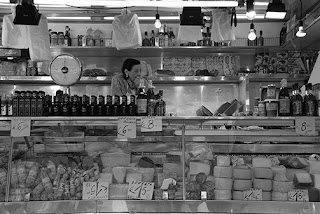 I have so many great memories associated with this market and its vendors, and the countless wonderful meals I was able to make from purchasing items from here. There's the charming father-son fruit and veggie sellers, always quick with a compliment, who have great puntarelle in cooler months. There's the woman with great tomatoes, in all shapes and sizes, that perfume the whole piazza when the sun warms their tender skins. There was the elderly "donna del bosco" as I dubbed her: she sold everything from the forest (bosco), from berries to earthy mushrooms. She must have passed away a few years ago, as she's no longer at her stand. I miss her. There's Anna and Erasmo, the couple who took me in as one of their own, feeding me delicious cheeses and salumi over the years (they're forever my source of the best ricotta di bufala around), and chatting away with me and my family and clients, offering hugs to everyone. And there are the butchers in the center of the piazza, who have always been warm to me, and always impressed clients with their capacity to cut the most tender, paper-thin slices of veal scaloppine for saltimbocca: no pounding needed. 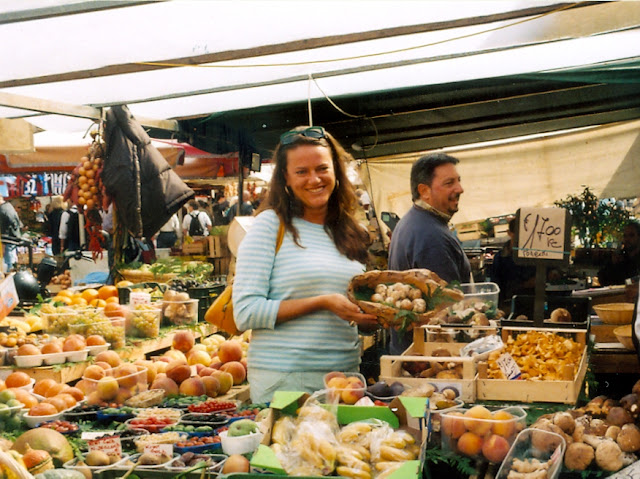 But the ones I call "my guys"? The ones who will deliver to my home, and to my restaurant, the most exquisite ingredients (lots of) money can buy? The ones who let me film with a crew any time, 7 am or 2 pm, to get the shots we needed for various food shows over the years? The guys I'd sometimes pass by on my way home from a late night out, when they were setting up at 4:30 a.m., and we'd wave at each other and say "a dopo!" (see you later)? The ones who listened to me when I requested that they stock "strange" ingredients like cranberries at Thanksgiving, and lemongrass and cilantro throughout the year? The ones who offer me tastings of jewel-like fruits and baby cherry tomatoes so sweet they're like popping candies? Da Claudio, of course. Some Romans call this place "Da Bulgari" because it's pricey. But sometimes, you need to pay to get the good stuff. That's Claudio behind me in the photo, hamming it up for my Mom who was taking the picture ("Is this your beautiful sister?!") -- he's a real character, always yelling and selling and making a scene. But he's a good guy, and I've been a client for more time than I care to admit. And still, every time I go back, whether I've been away 6 days or 6 months, I always get a "bentornata!" (welcome back). The Campo will always feel like home to me.


Posted by Dana Klitzberg at Wednesday, May 01, 2013 No comments: Links to this post