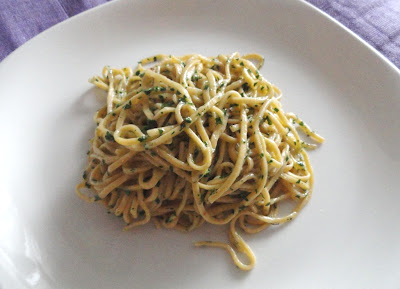 Italians excel at making something from nothing -- anzi, something great from nothing much. This is especially true when it comes to food, and the culinary embodiment of this magic is spaghetti aglio olio peperoncino.

This pasta is a standard go-to and a real comfort dish for Italians everywhere. The thinking is that at any given time, every Italian worth his or her salt in the kitchen has some garlic, olive oil, and dried chile pepper on hand. And pasta, of course.

It's comfort food because the flavors are the backbone of so many Italian dishes, and a standard because it's easy and quick. Years ago, when I'd been working at San Domenico New York for only a matter of weeks, I threw a holiday party with my roommates at our apartment. I invited my new amici from the kitchen, who showed up in a group after dinner service was over, some time after midnight. This arrival en masse didn't only give a jolt to the party (comments of the "where did all these hot Italian men come from??" variety were overheard). It also provided for late-night feeding. When the guests who remained into the wee hours got hungry again, after finishing off all of my cocktail party nibbles, the Italians came to the rescue.

All of a sudden, the ragazzi were in our kitchen, whipping out pots and pans, pasta and provisions. And somehow, in a flash, they were all shirtless as well! (perhaps they were not used to the stifling heat of Manhattan apartments in the winter?). And in seemingly the time it took to open another bottle of prosecco and fill glasses, we were all being served by lovely, topless Italian cooks, the perfume of browned garlic and spicy chile lingering in the air. Buon appetito! they announced. And silence fell on the crowd as everybody stuffed their faces appreciatively. Friends still remember that night fondly, noting that is was "one of the best pastas ever." Sometimes, simplicity rules. (And drunken hunger pangs help. As do sexy shirtless Italian men).

So, the basic formula is this: Boil water. If using dried pasta, boil the pasta (if using fresh, throw the pasta into the water once you've already infused the oil). While it's cooking, you heat some olive oil, chopped garlic, and peperoncino in a pan. When the pasta is done cooking, toss it into the pan, add salt to taste, lots of chopped parsley if you have on hand, and there you have it. It's basic. The art of the dish is in the timing, the flourishes, the additions and modifications.

I give the recipe as 'spaghetti', though the pasta could be any kind, keeping in mind that pasta lunga (long pasta) really is best. Fresh pasta works equally as well, as the tagliatelle in these photos will attest. I add parmigiano reggiano cheese when I have it on hand because I like it, but you can add any kind of grated cheese, or not, as you see fit. Same with the parsley, or any green herb (I've often thought that a handful of chives would add an interesting verdant, onion-y dimension to the dish). Once you get the timing down, and know enough not to burn the garlic and chile pepper, you can have fun with personalizing your very own version of aglio olio peperoncino. Topless Italian men optional. 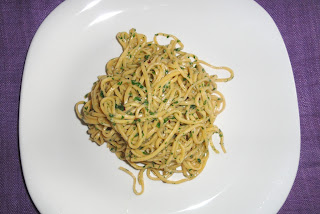 - Bring a large pot of water to a boil.
- Once the water comes to a rolling boil, add a generous couple of pinches of salt (the water should be briny, almost like seawater), and toss in the pasta and stir.
-After the pasta has been cooking for 6 minutes, heat a large skillet over medium heat, add the olive oil until warm, and then add the garlic and peperoncino, cooking until the garlic is barely browned, a minute or so.
- When the pasta is al dente, drain the pasta and add directly to the pan with the oil in it. Add salt and pepper to taste.
- Toss pasta to coat it with the oil mixture. Add the parsley and the cheese and stir until evenly distributed. Taste and adjust for salt. If the pasta is dry, add a little of the salted cooking water to the pan.
-Dig in! 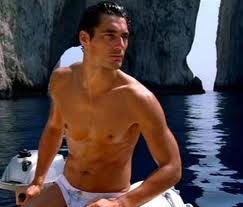 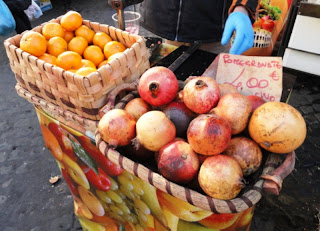 The Campo de' Fiori market in Rome is a great place to come during the late morning and early afternoon. Not only can you do your produce shopping, order your favorite cuts of meat and game from the butcher, pick up some delicious cheeses and salumi, and get a slice of one of the best pizze bianche in the city, but you can also get a quick snack between meals. The variety of fruits and vegetables in the market, ready to be rinsed under the constantly-running Roman water spigots and eaten out of hand, is astounding -- and seasonal. 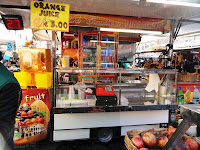 So when I was strolling through the market square one afternoon in January, my guys at the "Da Claudio" fruit and vegetable stand insisted that I try one of their fresh spremute, or fresh-squeezed juices. On offer for winter? Melograno e mandarino: Pomegranate juice and mandarin juice. My friend and I decided to try the two blended, which I highly recommend. It packs a vitamin C and antioxidant 1-2 wallop -- and it's incredibly delicious, sweet-tart, and the perfect way to beat the midwinter blues, even if spring is just around the corner... 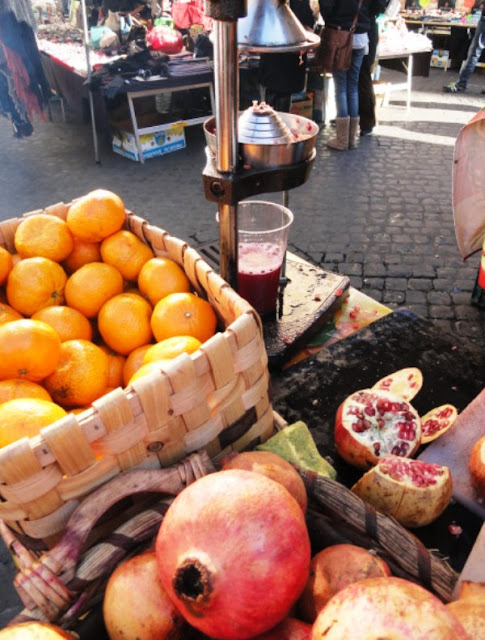 Posted by Dana Klitzberg at Thursday, March 15, 2012 No comments: Links to this post 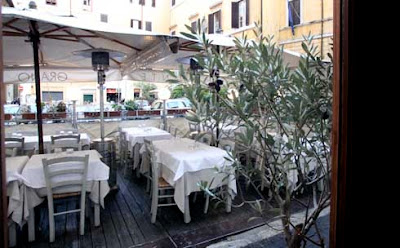 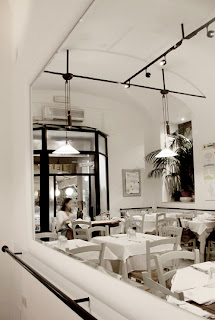 Fresh from the process of updating and rewriting the Where to Eat section of the Fodor's Rome Guide 2012, I thought I'd post an expanded and modified (and personalized) review of one of the restaurants I added to the section this year.

GRANO is a contemporary trattoria in a charming piazza around the corner from the Pantheon. Aesthetically, the white walls covered, in parts, with colorful children's drawings, give the main dining room the look of a postmodern architectural schoolhouse.

The smaller, second dining room with the addition of bookshelves, seems the school's library. And the outdoor deck with large white umbrellas and numerous tables would, in this metaphor, be the playground. On the whole, Grano is a light and lively restaurant, serving tasty food, at not-too-steep prices, to a mostly local crowd. All good things.

The kitchen is not quite chemistry lab, but it does turn out re-invented versions of Italian dishes, both Roman and from other regions up and down the Italian peninsula. For starters, the polpette di brasato con salsa verde are smallish meatballs of the famous piemontese wine-braised beef, here pulled, breaded, and deep fried, served on a slick of bracing green sauce. It's unusual and delicious. And for traditionalists, there are portions of pristine mozzarella di bufala and marinated anchovies served simply on a few leaves of arugula with a drizzle of extra-virgin olive oil.
A delicious tweak of a Sicilian classic is the octopus antipasto (which could also be a primo): instead of pairing it with chickpeas or canellini beans as is the practice, a grilled baby octopus is placed atop a mound of orzo perlato, a grain -- not the pasta version of orzo -- with a bite that matches the chew of Sicilian polpo (octopus), here rendered tender by a braise before being grilled. The primi here are often standouts, including, when available, a pasta with tiny baby clams paired with asparagi di mare, know in English as sea beans. This is a delicious, fresh-tasting combination that encapsulates the brininess of the sea in every bite.

Also looking southward -- this time Campania -- is the simple pasta dish of tiny ditalini with a vegetarian "ragu" of sundried tomatoes, Gaeta olives, mozzarella, and basil. As for secondi, they're often less interesting. Porchetta (roasted suckling pig) with rosemary potatoes should be called 'porchetta...che peccato' (what a shame) because serving a so-so version of what can be one of The Greatest Things To Eat On This Planet is a sin. Ditto the tuna with caponatina: Sicily has some of the most prized fresh tuna on the planet, and caponata is one of the world's great traditional vegetable dishes (trumps ratatouille ANY day). Italians now need to learn how to cook said tuna, and Roman chefs could use some schooling in the ways of making sweet-and-sour eggplant-veggie-heaven the way it's meant to be made. Still, the breaded calamari is perfectly good, and with a side of broccoli or sauteed chicory, it makes a tasty main course. 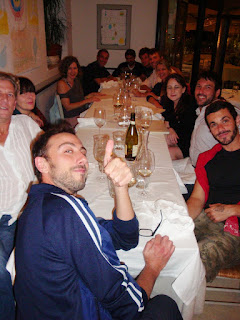 Desserts here are relatively delicious, even though they don't stray far from Italian standards like tiramisu'. But the atmosphere is so pleasant, it's worth poring over the wine list to find a dessert wine or digestivo you can enjoy with your dining mates. A limoncello, or an amaro, perhaps? I liked the setting so much that I chose to have a recent birthday dinner here, surrounded by a dozen or so dear friends. We lounged and lingered, we ate, drank, and were merry.

And my lovely friends showered me with wine and prosecco and limoncello (my holy trinity?), and lots of gorgeous gifts, like the handmade earrings of breathtaking bronze freshwater pearls and jet I'm modeling in the photo below. And when all was said and done, they managed to find a tasty chocolate dessert into which they lodged a candle. I made my birthday wish -- and although it's bad luck to divulge that wish, I can say that it involves a lot more good food, great friends, and delicious fun in the future. 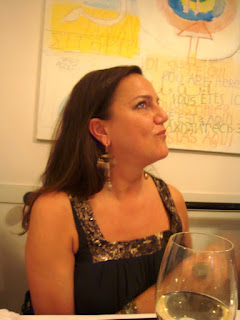 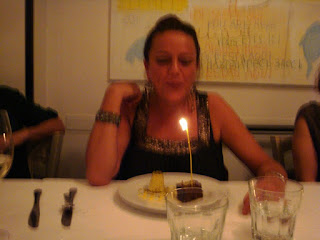 Posted by Dana Klitzberg at Tuesday, March 06, 2012 No comments: Links to this post