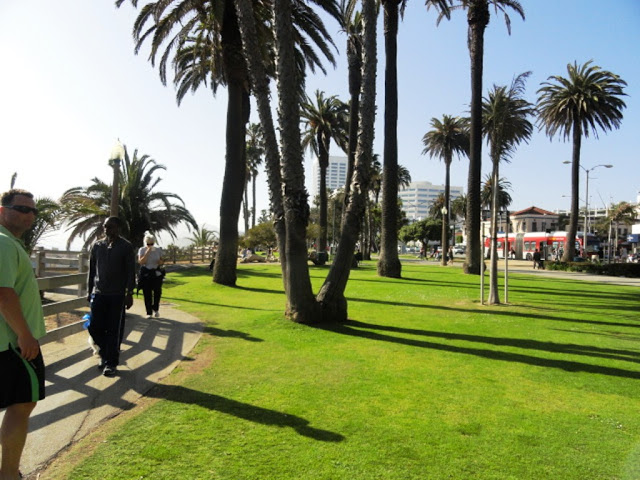 We're not talking cutting edge here. This is a dining round-up comprised of restaurants that have been open for quite some time now. So it may not be about the latest iteration of avocado toast from Sqirl or the hottest new entry from the Animal guys. But we are talking about beautiful food, innovative food, and in other cases just simple, soulful food done well: five examples of restaurants in L.A., center and west to Santa Monica and Venice Beach, each offering their own spin on dining as people-pleasing experience. 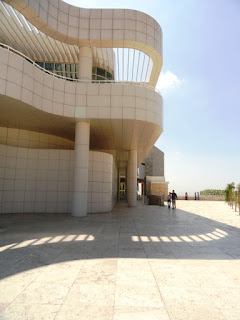 The Getty Center itself is an amazing spot where one can both escape and overlook the city. The architecture and design of the grounds is reason enough to visit, regardless of what's on exhibit within these curved, soaring walls. 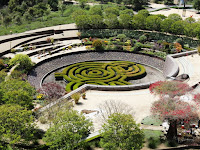 The gardens and landscaping are another draw, and the setting on high makes this day trip-worthy. But best of all, particularly if you're a lover of expertly-prepared, refined cuisine in gorgeous spaces? The Restaurant at the Getty Center. Here, I enjoyed lunch in the sun-soaked dining room with my former-pastry chef, always-culinarily curious-friend Deb. 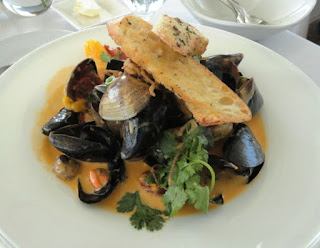 We feasted on a light, modern bouillabaisse, beautifully stacked in a shallow bowl.

We tucked into a rich but light cannelloni with ricotta, laced with carrots and squash blossoms and enoki mushrooms, topped with fresh greens. And we went for one dessert between the two of us, because really, how could we not try at least a little something sweet? 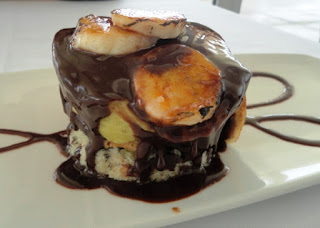 Our choice was a tempting, moist banana cake and mousse topped with caramelized bananas and drenched in a decadent dark chocolate sauce. We were definitely slowed down after the lunch, but we'd been smart to see most of the museum and its grounds before digging in, so all we really needed to do was wander through one wing looking at photos, before heading home for an afternoon nap.

Next up? No trip to modern day L.A.'s food world would be complete without a stop at Jose Andres's The Bazaar. The place is surreal. You walk into the hotel lobby of the SLS Beverly Hills, designed by Phillipe Starck, and immediately feel like you've been swept away through the Looking Glass into a bizarre-o Wonderland for food chemists and tinkerers. 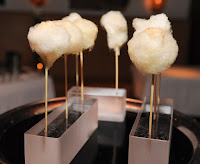 And essentially, that's what Andres is. Like Ferran Adria' before him (who was also a mentor), Andres plays with his food, but in the most refined and delightful way, fully bringing all the senses together to taste, smell, see, feel. Only a chef with a sense of humor, playfulness, and confidence would serve the puffed sugar air that is cotton candy, and use it on his savory menu, to encapsulate a nugget of foie gras within. The menu is peppered with quotation marks and asterisks. 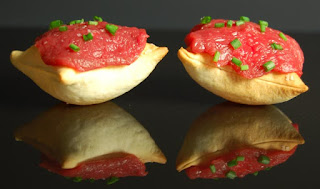 Mussels are "en escabeche," there is a deconstructed Philly cheese steak that becomes thinly sliced raw or lightly-seared wagyu beef on cheesy "pillow bread", and even the most ubiquitous of classic Spanish dishes, the torta espanola (basically a thick egg frittata loaded with potatoes and onion) is re-imagined as a tortilla de patatas "new way" with potato foam, something called egg 63, and caramelized onions. And of course, there are the olives served three ways -- one of which is famously liquefied and then encapsulated in an olive skin-like skin. 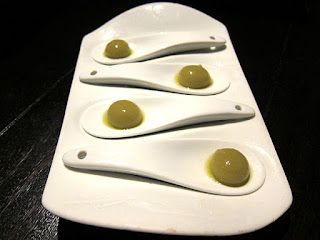 Though it's now a standard dish in the molecular gastronomy canon, it still thrills to bite into the "olive". We skipped the basics in the cheese and jamon categories (of top quality, I'm sure, but there is more exciting eating to be done here), and went for the slightly exotic dishes, along with ones that just sounded plain delicious. I loved the twists on Spanish and Mediterranean food, like the examples above, plus any iteration of ceviche/tartare/raw fish deliciousness always makes me giddy when I know I'm in great chef hands. 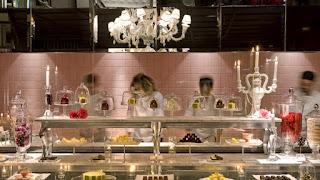 The meal ended up being a feast for the taste buds and we stuffed ourselves to the gills -- though not before being redirected to the dessert bar for a super-sweet ending to the meal. The place looked like something out of Willy Wonka or "The Nutcracker" -- it was over-the-top in its confectionery pastel wonder. We stumbled out after dessert in a diabetic coma that overtook any of the bubbly we consumed with dinner! It was a great experience and something in which we all should partake at least once. 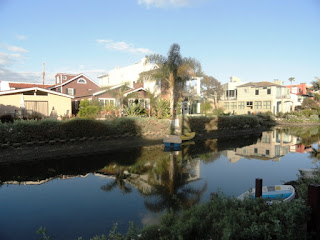 I headed out to Venice Beach because it was a new experience for me (fortunate enough to have seen Venice, Italy countless times before I'd ever seen the Californian version!), and because my cousin was playing a music gig out there: motivation to make the trek west. We walked the coastline, noting the kitschy surf shops, spotting "Muscle Beach" made famous in the 1980s, and passed many a hawker of medical marijuana cards asking us if we suffered from headaches, wink wink. We finally settled in to meet up with another local friend of mine from our days in Rome.

We had beers on the beach as the sun lowered in the sky, and eventually went to dinner at a decades-old standby for Mexican(ish) food -- not, as the name might imply, Moroccan cuisine -- called Casablanca. 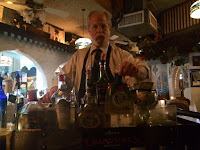 As in white house. But mostly named after the movie. Confusing, I know. Anyway, the place is famous for their  awesomely potent margaritas, shaken and mixed in front of you from the guy with the margarita cart. There were also a few older Mexican ladies making homemade tortillas for diners to watch. (The whole city of L.A. knows something about showmanship). 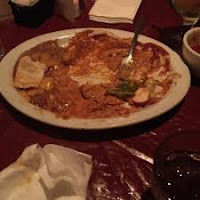 The obligatory mariachi band was there too, of course. We enjoyed the standards of Mexican menus in America -- guacamole and freshly-fried crispy tortilla chips and salsa, enchiladas with refried beans and rice, and seafood and veggie fajitas. They were all very decent versions of these standards, and we left satisfied and fortified for my cousin's performance, which was (of course) fab. I was able to see the charms of living on the "west side," as locals call it, with access to the coast line and all of the lazy living (in the best way) that goes along with it. 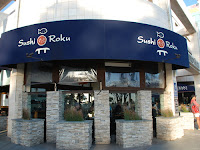 In Santa Monica, there are lots of offerings. Sushi Roku is a modern, Americanized (but not too much) Japanese restaurant specializing in fun, original sushi, sashimi, and maki. I always ask my L.A. friends if we can go there one night for dinner, because I still hold steadfast to the belief that sushi is better on the U.S. west coast. Something about the Pacific shared with Japan, I suppose. The dining room is funky, modern Asian chic and the menu is full of interesting flavor combinations, both for raw fish lovers, and those who only order off of the "cooked" menu at a Japanese restaurant. 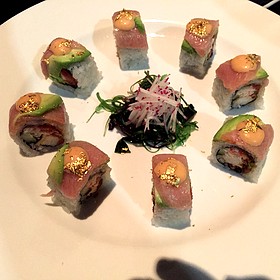 It's hard not to over-order as my eyes always seem to be bigger than my stomach here. Of the same ilk, but in West Hollywood -- and therefore a bit more dressy-appointment dining, is KOI. Like half of the places in this neighborhood, we have one in New York (two, actually). But again, the west coast thing with sushi. And this mini-chain of restaurants has outposts as far-flung as Bangkok and Abu Dhabi. As expected, the Asian-inflected cocktails here are delicious. And then, this is the kind of place where you order champagne to drink throughout the meal, just because. We indulged in tartares and lobster tacos, shishito and edamame, and sushi galore. Whatever specials they were featuring, we ordered them. We were half a dozen women who wanted to try everything! The only thing was, they were going home after dinner, and I was meeting another college friend of mine for a late night out on the Sunset Strip, heading to music clubs and terrace bars galore. It was a long one, but it was my final night in L.A., and I wanted to make it last.