I recognize that this is a blog about food and things food-related. Culture, cocktails, cuisine. I'm certainly not here to get political or philosophical. But sometimes things happen in the world at large that affect us and force us to stop and think. The recent death of UVA student Yeardley Love at the hands of fellow Virginia student George Huguely has done just that.

I graduated from the University of Virginia, and my fourth year (senior year in UVA parlance), I lived just doors down from where Yeardley Love lived, and died. She seems, from all accounts, to have been the typical UVA young female student: well-rounded, happy, intelligent, and attractive, about to really begin her life at 22. Her sometimes-boyfriend Huguely put an end to that by beating her, slamming her head against the wall, and eventually killing her. That Huguely had a string of minor offenses and scuffles with the law is not in question, nor does it really matter, in my opinion. He seems, by all accounts, a somewhat-typical young athlete from a privileged background who sometimes got a little too drunk and threw his heft around too often.  Now, many people are questioning whether or not this tragic death could have been prevented. What were the warning signs that something like this might happen? If the powers that be at Virginia would have known about Huguely's past 'incidents,' wouldn't they have suspended or expelled him and prevented this tragedy? But positing the "what-ifs" doesn't help.

The real problem at the bottom of this is: what's wrong with our culture? What is it that makes our supposedly-civilized society turn to violence so easily, and so pointlessly? Why are our youngest generations walking into schools and mowing down their peers with machine guns (and why has the state of Virginia suffered so terribly in recent years)? Why are our men, our athletes, and our "role models" beating and raping and killing their girlfriends, wives, and exes -- targets who are clearly no physical match for the likes of Mike Tyson, or Lawrence Taylor, Scott Peterson, or George Huguely? Clearly, something is gravely amiss in America, when a country purported to consider women as equals to men is unable to protect its women from the vicious tendencies of these bullies -- or more importantly, prevent the creation of an environment in which these tragedies happen in the first place.

As a woman living overseas, I certainly had my struggles in Italy -- a Latin country that both reveres its women and the myth of the "mamma," while clearly continuing on its historically misogynistic path. The scenario is the same in most Latin countries around the world. But they never see violence like that which has become all too commonplace in the U.S. The message that needs to be repeated again and again to our boys, to our men, is this: it is NEVER, EVER acceptable behavior to raise a hand to a woman. Never. Period.

Huguely's actions were not "a mistake." This was not a man down-and-out, driven to violence as some last resort. This was a kid, an athlete, in an idyllic Southern town, at one of the country's top universities. He knew this violence was wrong (the fact that he stole Love's computer from her room to hide evidence of their recent correspondence points towards Huguely's recognition of his wrongdoing). One of the things that makes me saddest about this is imagining Love's family having to hear that a few weeks shy of graduation, they had to come identify the severely beaten body of their beloved daughter, sister, niece -- an unconscionable phone call to receive.

College is supposed to be one of the most wonderful periods in a person's life.

And I can speak for a lot of UVa. graduates when I say that the University is an amazing place. I met some of my favorite people in the world while I was there. So. What's happened?? Why this? Why now? I'd love to hear your thoughts. And in the meantime, my thoughts go out to Yeardley Love, her family, and her friends.   I myself lost a dear friend at 22. No young person should have to suffer such a tragic end at such a young age. And no one at that age should have to experience a peer's death, a loved one's death. Yeardley Love, sadly, terribly, is gone too soon. 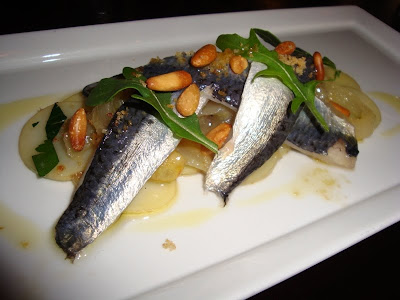 Tribeca isn’t lacking in great eateries, but this Italian straddling the rustic/refined line is a welcome addition to the nabe. It’s many things to many people: a great lunch spot for the eclectic local work crowd, and a relaxed crowd-pleaser in the evening – the kind of place where expense accounters, local celebrities, and Manhattanites from further afield come for a reliably delicious Italian-esque meal. Renowned pastry chef Karen DeMasco (formerly of Gramercy Tavern) even turns out pastries and savory-sweet goodies for breakfast. The style is a mix of authentic, accomplished Italian food – traditional dishes tweaked ever-so-slightly for the local palate, or the chef’s amusement, or both – with Italian-American comfort food staples like Chef Andrew Carmellini’s  “ grandmother’s ravioli.”

The dining room is a series of different spaces, cavernous yet warm, with ultra-high ceilings more reminiscent of farmhouses in Umbria or the Maremma than a converted industrial space in downtown Manhattan. I headed to the ladies room at one point, and as I descended the stairs I was immediately swept away to an upscale dining experience (or a combination of experiences) I'd had in Umbria, Tuscany, and Le Marche, both by the aesthetics of the space and the smell of a wood-burning fireplace I'd not smelled anywhere outside of Italy. (I'm still puzzled as to where that exact smell was emanating from, and how...) 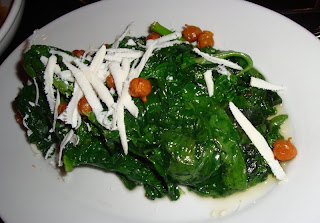 To begin to sate your appetite, start with a crostino appetizer like the simple sheep’s milk ricotta with herbs, or go for the Sardines in saor (a classic Venetian dish) – wonderfully paired with homemade focaccia that’s lifted with the addition of lemon. A classic fritto misto is made all’Americano with Ipswich clams and rock shrimp, species native to these shores of the Atlantic. Then, pull yourself away from the appetizers, since the pasta is well worth saving room for. Those aforementioned ravioli are delicious (and, we suspect, much lighter than Carmellini’s grandmother’s original version). So are the orechiette with broccoli rabe and duck sausage, a sauce more pesto-light than anything, lacking both the kick and bitterness of the signature pasta preparation of Puglia, but tasty anyway. Sides include a delicious sauteed spinach with chickpeas and ricotta salata (see photo).

The stuffed mountain trout (photo at right) main course with lentils and pancetta is in homage to landlocked Umbria, and beautifully presented. The garlic chicken is a simple, wonderful joy, meriting the inclusion on the menu of a fowl usually limited to staff meals in Italian restaurants. And when the porchetta sandwich is available…well, just make sure you order it. Period.

Desserts are well-executed if a little staid, but desserts were never a strong point of Italian cuisine. With DeMasco’s talents (and they’re evident in the savory breads and the like coming out of the kitchen), I’d like to see her apply some of that Midwestern sensibility that Carmellini wields so successfully, to  the desserts. If there’s one thing the American tradition has perfected – well beyond the Italian tradition – it’s sweets.

Posted by Dana Klitzberg at Thursday, May 06, 2010 No comments: Links to this post