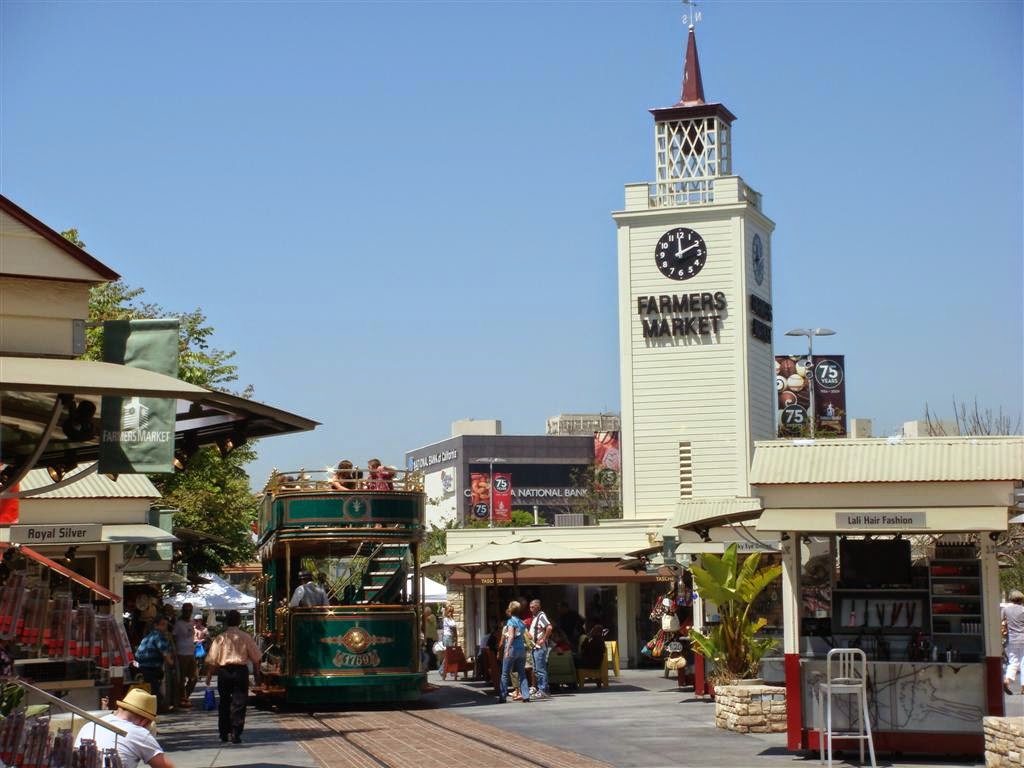 Farmer's Markets right now are, one could say, trending. And though we're using a very 21st century term for a much older concept, we can be thankful that there's been a kind of movement in this country to get back to the basics that once made this an agrarian nation. California is of course responsible for a large segment of America's produce. But when we think of Los Angeles, southern California's metropolis, we generally think of urban sprawl and smog, and Hollywood, Santa Monica and Malibu. 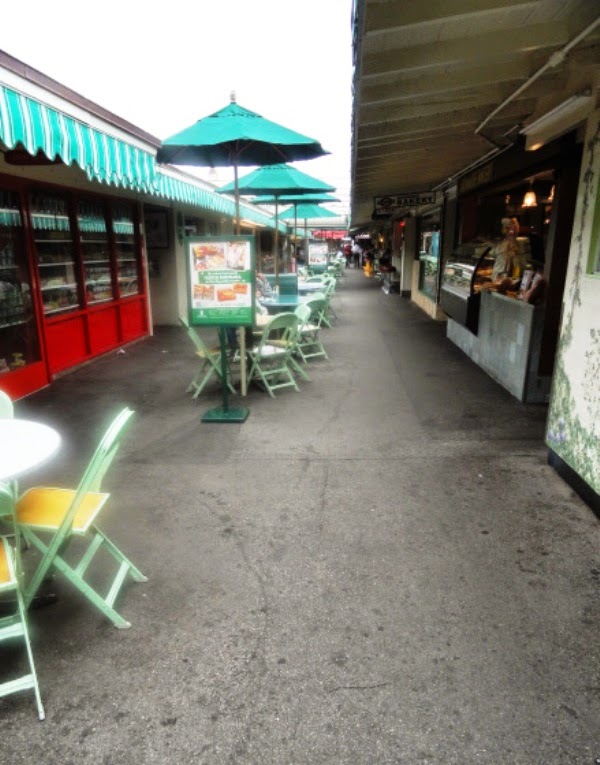 But not...farms. And yet, the Los Angeles Farmers Market -- coined "The Original" -- is a venerable institution that has been around since 1934, when L.A. was decidedly less urban. At the corner of Third and Fairfax, its central location makes it a Los Angeles landmark. It's a market housed in a building structure that allows it to have an open courtyard feeling inside, while the merchants and restaurants within are based in covered permanent structures. 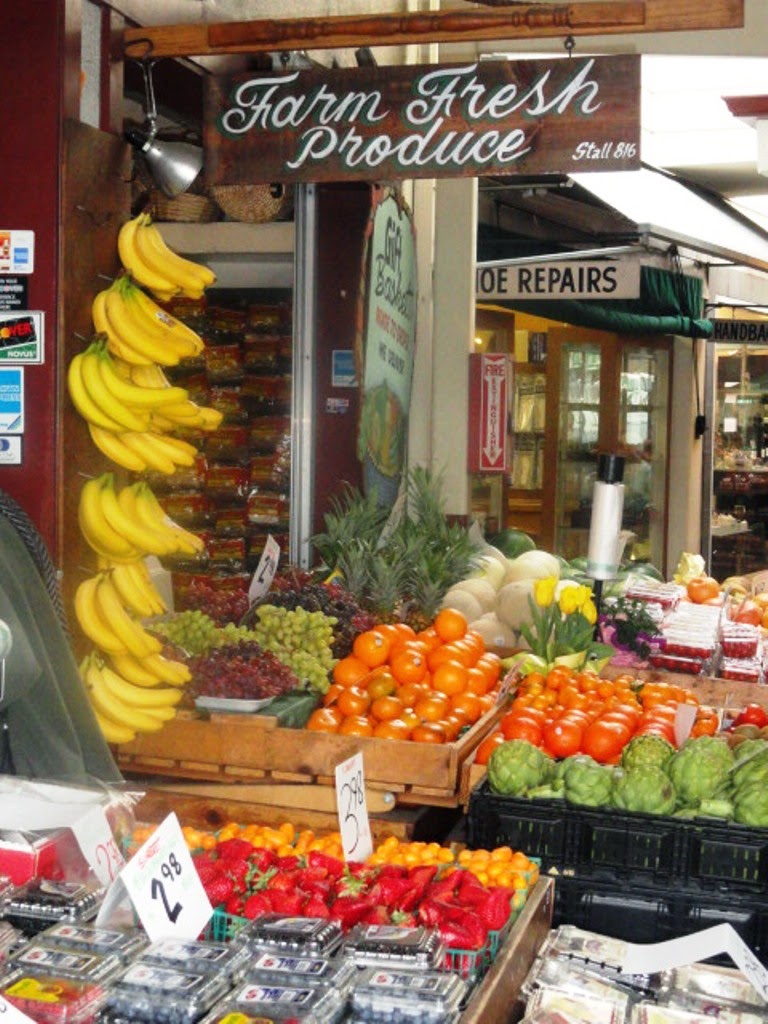 It's a destination where you can source great produce, poultry, meat, and seafood, and stay for lunch at one of the great stalls or restaurants housed in the market. Both Farm Boy Produce and Farm Fresh Produce offer great fresh fruits and veggies, including items you'd find not just in California, but also south of the border, and in Asia. Puritan Poultry offers fresh chicken, turkey, and exotic fowl, and Farmers Market Poultry specializes in delicious turkey and quality eggs. Marconda's Meats offers top-notch butchered cuts of beef, lamb, and pork, as well as homemade Italian sausages and cold cuts. Tusquellas Seafoods is the place for staples like shrimp, tuna, salmon, cod, and snapper, as well as fresh daily catches -- and some cooking tips for anyone who asks. 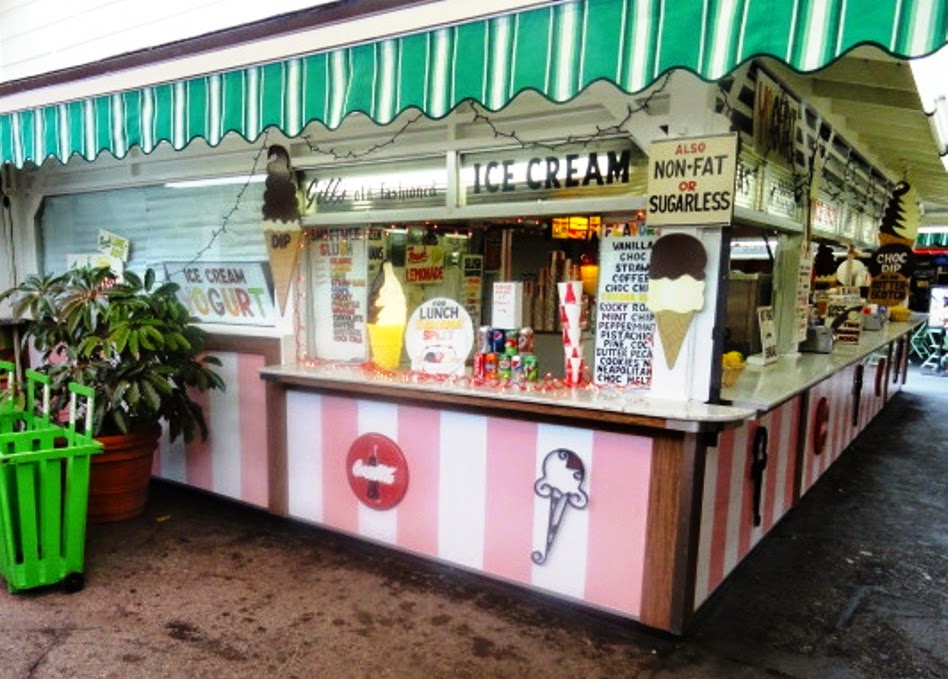 Little Spain is a gourmet market with a tiny restaurant tucked into its back interior patio, and offers all the wondrous foods and specialty ingredients found in Spanish cooking. In fact, there are several specialty-item stores. Dragunara Spice Bazaar has a mind-boggling array of spices and spice mixes, as well as specialty salts (a personal favorite). T (The Tea Shoppe) has an exotic array of teas, particularly from Asia -- heavenly for all of those tea purists out there.

And Zia Valentina is a spot specializing in the fabulous frozen Sicilian treat called granita (the original frozen treat before Italians made the leap to gelato), as well as specialty Italian baked goods and healthy shakes and nibbles to jump-start your morning. There are several delicious bakeries, including Normandie Bakery (classic French style), T&Y Bakery, Short Cake, and Du-Par's Pie Shop (a real American throwback). And for old-fashioned American frozen goodness, there is Bennett's Ice Cream and Gill's Old Fashioned Ice Cream. 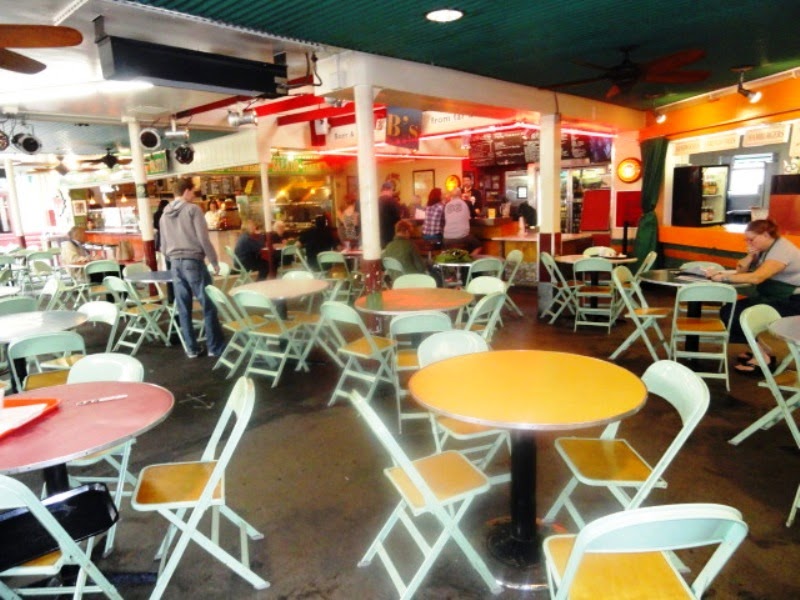 And then there are the restaurants. With a generous seating area and so many delicious spots from which to choose, I could happily eat here 3 times a week if I lived in the area (luckily for my waistline, I do not). The restaurants in the Farmers Market are a reflection of the ethnic diversity of Los Angeles itself. Of course, you have Mexican food, sushi, pizza, Chinese, deli, and vegetarian food. But you also have Korean, Brazilian, Middle Eastern, Cajun, Greek, Texas BBQ, Spanish, and French cuisine featured here. 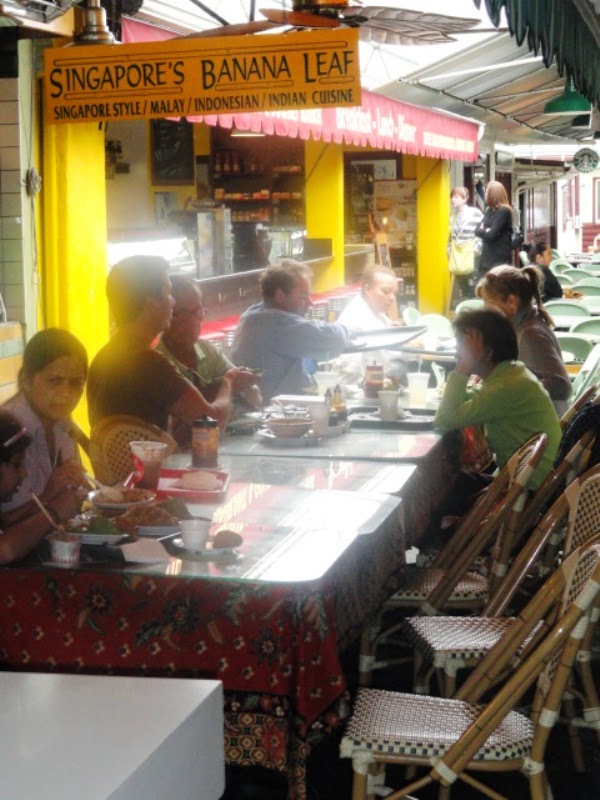 I decided to try the Southeast Asian restaurant called Singapore's Banana Leaf, on a recent visit. They offer a mix of Singapore-style Malaysian, Indonesian, and Indian cuisine -- because that's how they eat in Singapore. This delicious mash-up proved satisfying, filling, and delicious. For under $10 a plate, any one dish would serve as a great lunch. 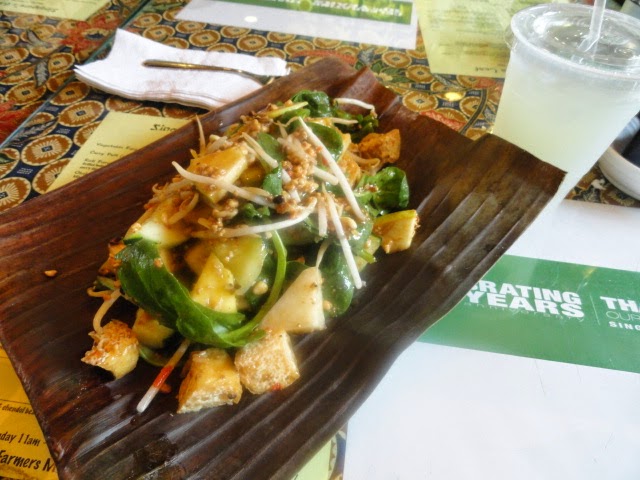 But I suffered from eyes-bigger-than-my-stomach syndrome, and was curious to taste a couple of dishes. I started with the Rojak salad, a tasty tossing-together of cucumber, pineapple, bean sprouts, apple, tofu, and spinach. The spicy peanut-tamarind dressing brought it all together in the hot-sour way that makes food from this part of the world so interesting...and more-ish. 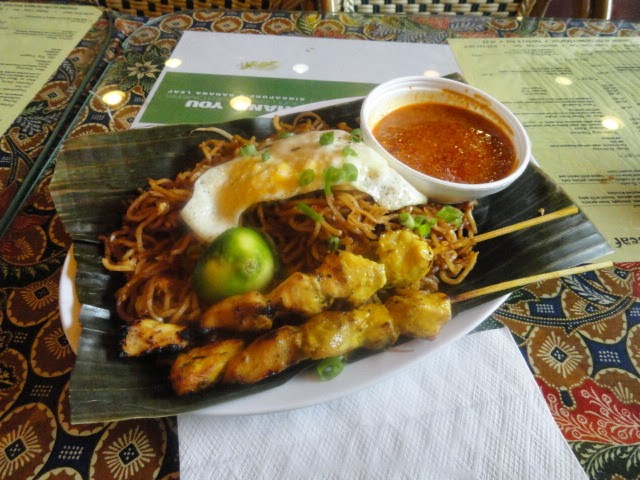 I followed that up with Mee Indo Style -- that is, pan-sauteed noodles with two satay sticks and a fried egg on top - -with spicy peanut sauce on the side for dipping, of course. If I'd been hung over it would have been beyond perfect, but as it stands, this lunch was pretty fabulous. A limeade to help wash it down was the best accompaniment I could have asked for. 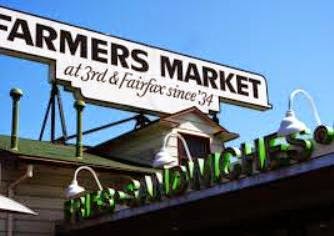 There are other, non-food-related stores at the Farmers Market, including Zara, a sunglass store, and a new Havaianas store, to satisfy all of your Brazilian flip-flop fantasies. The Grove L.A. is literally steps away from the Farmers Market, too. It's a popular gathering spot if you need to make a run to the Apple Store, Nike, or Nordstrom, or to see a movie or grab a bite to eat in one of the pretty eateries in the main square. I prefer just enjoying the Farmers Market for what it offers. When L.A. can feel like a nameless, faceless sprawling metropolis, it's merchants and farmers that gather in one place, like this, that remind us that we're a community, first and foremost. That's enough for me. That, and maybe a scoop of ice cream.